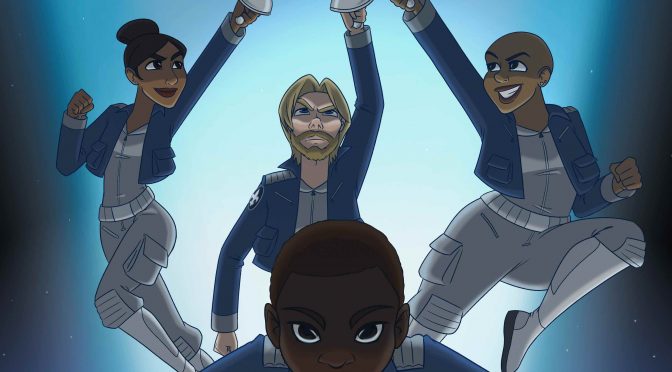 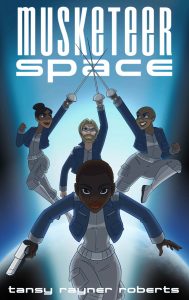 Now a little while ago I did a review of Musketeer Space by Tansy Rayner Roberts that was a bit of a cheat, in that Roberts was publishing the book at the rate of one chapter each week, and I was only about half way through. I was doing a bit of cleaning up on this site last week, and I realised I never went back and gave any final thoughts. You can read my original review here.

Musketeer Space is a (mostly) gender-swapped retelling of The Three Musketeers by Alexandre Dumas as a space opera.

The Three Musketeers is a messy, uneven, glorious romp of a novel, and with Musketeer Space the plan is for the story to remain essentially intact despite the addition of advanced technology, racial and sexual diversity, and a whole lot of women with swords.

When last we spoke of this book, I was on chapter 33 (around half way through the book) and going strong. So how about the rest of the book? Well, the wit remained sharp. The characters remained well rounded. The diversity remained broad. The adaptation to a space opera setting remained clever.

I was interested to see how Roberts would keep in line with the original text, when so much of the context was incredibly different. For the most part, the underlying construction and plot lines were remarkably consistent, and the use of a wide array of sexual orientations meant that relationships could be maintained even where some gender swapping from the original characters had taken place. But for all that drive for consistency, the novel remained fresh – a real feat all things considered.

Now, as a warning for the faint hearted, there is so much sauce in this book you could bottle it and hold a sausage sizzle. This very much fits in with the tone of the novel, and due to the afore-mentioned diversity of sexual orientation there is pretty much something for everyone as the plot rolls on.

And speaking of the plot, it is a very satisfying read from that point of view.  I found that part quite remarkable, given that Roberts was writing a few weeks ahead of publication and that introduced some real risk of inconsistency that come from an inability to go back and change an earlier chapter that was already written. The threads of the story came together very well, and I think most readers would be satisfied by the conclusion.

As I said in the previous review, if you’re a fan of Roberts’ work, you should get yourself a copy of Musketeer Space. Stretching my memory back, I don’t recall a lot of science fiction in Roberts’ body of work, but hopefully this will be the harbinger of much more to come.

Now, I got the book in eBook form for being a Patreon supporter, but a quick scan of the internet doesn’t seem to throw up anywhere where a new reader might source the book in that form. The original blog posts are still available and can be found here.