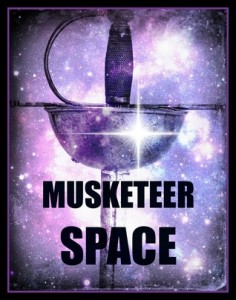 OK, more cheating. I’ve selected Musketeer Space by Tansy Rayner Roberts for my next review and the book isn’t even finished yet. “Why?” I hear you ask. “How? Isn’t your cheating just getting super blatant now?”

All valid questions, but stick with me people. Have I ever steered you wrong?

Musketeer Space is the latest endeavour by Tasmanian based speculative fiction author Tansy Rayner Roberts. It is a gender swapped retelling of The Three Musketeers, in a space opera setting. In an interesting twist though, Roberts is writing the book in serialised form. She is releasing a chapter each week on her website, and has invited patronage through the Patreon system, where interested subscribers can pay to support her writing efforts. There are also a variety of perks depending on the level of subscription that you enter into (including an eBook of the whole novel once completed).

So a book you can read for free, but if you want to tip some money in you can also consider (and call) yourself a patron of the arts. What’s not to like?

At the time of writing, Musketeer Space is at chapter 33 and a little over half way through the story. One of the reasons I wanted to review it at this point was to signal boost an endeavour which is interesting both creatively and from a business standpoint. I’m fascinated with how people are experimenting with new forms of publishing in the internet age, and this is a great case study to follow.

A note on the Patreon model. It very much is a patronage relationship you’re entering into. For an effort like this that goes for at least 12 months, even at the lowest contribution of $1 per month you would be over-paying for an eBook if that was your only goal (I don’t know how much Roberts will charge for the eBook at the end of the process, but I very much doubt it will be $12). So unlike something like a Kickstarter campaign, you are not “pre-purchasing” the final product. You are making a conscious decision to support an author create a work that wouldn’t other exist – very much like patrons of a bygone age, just distributed through the power of technology.

To the story itself. The prose is characterised by Roberts’ sly wit, and filled with feisty, brave and competent characters. It has been very interesting to watch Roberts adapt the original storyline, and the choices she has made to accommodate both the new setting and new genders. The Three Musketeers was originally a serialised novel as well, and the parallels have been interesting to watch there too.

There is a lot of humour in the book, and if you enjoyed any of Roberts’ other books (e.g. The Creature Court trilogy) you’ll love Musketeer Space.

The pacing is excellent, especially considering the need to stick to the overall structure of the original text. Roberts balances action with emotion in the stories, and has created some very well rounded characters that it is very easy to care about.

As a part of meeting one of the targets of her Patreon campaign, Roberts has recently (as of Christmas 2014) released a novella length Christmas themed prequel to Musketeer Space called Seven Days of Joyeux. I haven’t read it yet, but extra content is just another reason to get on board this Musketeer road train!

In summary, this is a great book that is supported by an innovative funding mechanism. I’d highly recommend that you all go directly to the Patreon page and throw your support behind an Australian author doing interesting things in this brave new age of the internet.

I also reviewed this book on Goodreads (although a cut down version of this review without the Patreon discussion). View all my Goodreads reviews.