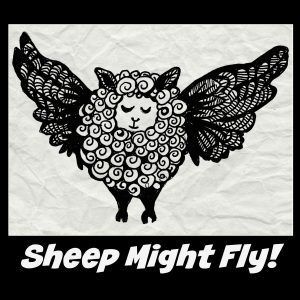 I’ve been on a bit of a Tansy Rayner Roberts kick of late (for example see my recent review of Musketeer Space, and I’m currently reading her crime novel Drowned Vanilla). What got me onto this dash was listening to Roberts new podcast, Sheep Might Fly.

Sheep Might Fly is a fiction podcast, with Roberts alternating between “reprint” and original fiction. She seems to be taking longer short fiction works, and dividing it up into bite sized chunks which she is releasing on a weekly basis. Roberts narrates the stories herself.

This is another innovative form of releasing fiction into the world, from an author who is clearly experimenting with all the new world of publishing has to offer. Her serial release of Musketeer Space, use of Patreon and now this venture into audio delivery of fiction has been interesting to watch. Combined with her more traditionally published fiction, Roberts seems to have really embraced the “hybrid author” approach championed by writers like Chuck Wendig (amongst many others). I love seeing people branch out and try so many different things, it’s the only way we’re going to find out what works in the 21st century for publishing..

Roberts launched the podcast with a 10 part serial, “Fake Geek Girl”, which was originally published in Review of Australian Fiction Volume 14, Issue 4. From the website:

Meet Fake Geek Girl, the band that plays nerdy songs at the university bar every Friday night, to a mixture of magical and non-magical students: lead singer Holly writes songs based on her twin sister Hebe’s love of geek culture though she doesn’t really understand it; drummer Sage is an explosive sorcerous genius obsessing over whether Holly’s about to quit the band to go mainstream; shy Juniper only just worked up the nerve to sing her own song in public and keeps a Jane Austen themed diary chronicling the lives and loves of her friends. When the mysterious, privileged Ferd joins their share house, everything starts to unravel…

Line by line, this story is trademark Roberts, with a playful wit and real focus on character development and relationships. In a remarkably short space of time, Roberts is able to provide enough world building elements to really whet a readers appetite. The characters are marvellously drawn, with Roberts switching voices deftly as she switches the point-of-view character. I loved listening to the piece week on week, but I must admit I only just felt like I was getting to know the characters and world when the story finished rather abruptly. The central mysteries of the story (will Holly leave the band? What’s up with the mysterious Ferd?) are wrapped up neatly, but I was left wanting more. I hope we see some expanded fiction set in this same world soon.

At the time of writing (early May 2016), Roberts has started on her second story, “Glass Slipper Scandal”. Again from the website:

Charming is a kingdom where fairy tales come true, which has been bad news for its troubled royal family, but good news for the gutter press that thrives on the scandals and gossip provided by their teenage Princes Gone Wild. Kai is a rookie reporter at the Charming Herald. Dennis is a new Royal Hound, charged with protecting the self-destructive princes from disaster.

Disaster arrives in a pumpkin coach… The story of the century is wearing glass slippers… and Castle Charming will never be the same again.

I’m only four episodes in, but I’m liking the premise again for this one. I’ll be interested to see how long this story goes for – it could be wrapped up rather quickly, but again I see real potential for how the story could move forward and expand.

If you’ve read and enjoyed any of Roberts work, I’d highly recommend downloading Sheep Might Fly and giving it a go. Excellent bite sized morsels of fiction, delivered free of charge to your electronic device of choice. Can’t ask for more than that!