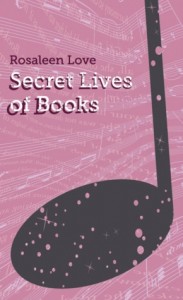 Secret Lives by Rosaleen Love is the 10th book in the Twelve Planets series from Twelfth Planet Press. It is a very quick read, coming in at 80 pages.

Now what did I think of the collection? In summary: beautifully written, surreal verging on absurdist, punchy, insightful and satisfying.

I’ve debated how much to write in this review, as I’m almost certain that my attempts to describe the stories will represent their magic poorly and may even put you off reading the collection. With that in mind, I’ve tried to briefly capture the flavour of each story below. Hopefully you’ll get a sense of the madcap and slightly bizarre nature of the collection (in a very good way).

The collection is made up of five stories:

I’m hard pressed to pick a favourite, but if forced to I’d probably lean towards The Kairos Moment. The sheer fun of the describing the attempts to capture a moment of musical departure was hilarious. In fact, hilarious is a word I’d use often in a longer review of this work. There are some serious themes explored in this book – feminism, relationships, colonial ambitions etc. But it is delivered with such a strong thread of humour that I spent the entire read being delighted by various turns of phrase, and only really considered the implications of the stories once I’d finished.

The writing of this collection is superb. The language dances from sentence to sentence, and concept to concept. The stories are only loosely plotted, but that hardly seems to matter. While the ideas get more and more outlandish, the prose stays clean and pragmatic, which only adds to the deliberate dissonance of the read.

I enjoyed this book very much, but to describe it further has diminishing returns. It won’t take long to read. Go and buy it. Now.