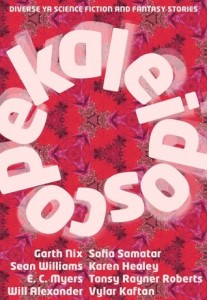 OK, I’m cheating a little bit here. I’ve decided to review a collection of short stories that are not all by Australian women for the Australian Women Writers Challenge 2014. Indeed, they are mostly not by Australian women. But wait, before you throw your monitor at the wall in disgust and walk out I have reasons.

So, if you’re still not buying what I’m selling, then you should stop reading the review here. But you’ll be sooorrrryyyyy!

Kaleidoscope was a crowd funded anthology that sought out YA speculative fiction that was written by a diverse range of writers and featured diverse characters (e.g. people with a disability, mental illness, suffering marginalisation because of race or religion or sexual orientation etc). However the mandate of the book was very clear – while characters needed to have a diverse background, they were not to be defined by their background. I particularly liked the requirement that characters were not to be “cured” of their diversity. Kaleidoscope is a mature treatment of the issues of diversity in the speculative fiction scene, and for that alone I’m hoping it is a sign of much more diverse fiction to come.

(As a side note, and because I’ve justified this review in part by pointing at an Australian small press run by an Australian woman, I might insert a plug here for Twelfth Planet Press. TPP has been supporting Australian women authors and championing this kind of diversity for quite a few years. Alisa Krasnostein, the owner of the press, is also one of the voices on Galactic Suburbia – a must-listen podcast for anyone interested in advancing the conversation on gender equity in the speculative fiction scene. If you haven’t already, go and check out their offerings, in particular the Twelve Planets series which has showcased some fantastic Australian women writers over the last few years. I’ve reviewed all the Twelve Planets books so far for the AWW challenge (including most recently Secret Lives by Rosaleen Love) – if you have even the slightest interest in understanding what is happening in the Australian speculative fiction field, you need to read these books!)

I won’t talk about all the stories, but as this is a AWW review I will briefly mention the stories by Australian women.

Cookie Cutter Superhero by Tansy Rayner Roberts opens the collection. The story is set in a world where superhero producing machines have appeared in  major centres around the world and people are selected at random to do a stint as a superhero. It tells the story of Joey, a young woman with a physical disability who has “won the lottery”. It is a funny, and not very below the surface, dig at the comic book industry, well written with Roberts’ trademark snarky style. Very nice opening to the book.

Signature by Faith Mudge was one of my favourite stories in the book, which focuses on the dangers of entering into a deal with Fate. Well written and characters that were well fleshed out, especially considering how little space there was to do it.

Holly Kench’s Every Little Thing gives a few twists on the trickiness of love spells. I enjoy Kench’s writing style, and this story was well constructed and a delight to read.

And for completeness, I will mention that I also enjoyed New Zealand’s Karen Healy story Careful Magic, which focuses on the perils of being a bastion of order in a chaotic world. Healy’s story hinted at a much bigger world, and left me with the desire to read other stories set in the same world.

There are also stories by Australian male writers Garth Nix, Dirk Flinthart and Sean Williams, as well as an array of international authors including Ken Liu, Sofia Samata, Jim Hines and John Chu.

As long term readers of the blog know, YA is not my favourite genre to read. I don’t mind young protagonists as such, but as I complete my transformation into a cranky old man I find myself less and less engaged by some of the themes that seem to resonate with teenagers. I also find the more restricted use of language (i.e. slightly simplified and “cleaned up”) creates more of a distance in the work. Some of the stories in Kaleidoscope suffered from this for me – the writing was excellent, but I found myself unable to “get into” the stories.