Skip to content
I recently read the second two books in the Zeroes trilogy by Deborah Biancotti, Margo Lanagan and Scott Westerfeld (Swarm and Nexus). Long time blog readers might recall that I read, and enjoyed, the first book in the series a while back. 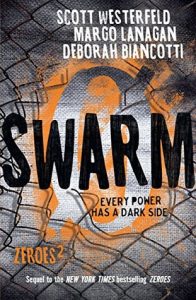 EVERY POWER HAS A DARK SIDE. Keep the secret. Use your power for good. Keep out of trouble. Stick together. Or things will fall apart.

It’s the holiday season, but the celebration at the Zeroes’ underground nightclub is blown apart when two strangers with new powers take to the dance floor. The Zeroes pursue them, only to discover that they’re fleeing an even more sinister power-wielder, Swarm. The Zeroes must learn all they can about this dangerous new player if they are to stay safe.

Meanwhile each of the Zeroes also has their own issues to deal with. Bellwether’s confidence is challenged, and Mob questions the nature of her power. Crash’s conscience gets a workout, and Anon and Scam face harsh truths about belonging. And it’s up to Flicker to pick up the reins and lead the Zeroes into a terrifying showdown.

A terrific sequel with a cracking pace that raises the stakes in this brilliant and unique superheroes series. 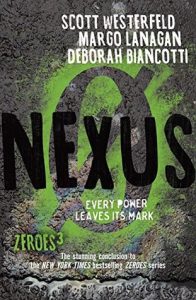 The Zeroes are in disarray.
One of them has vanished into thin air.
One of them is in prison.
The rest of them are on the most-wanted list.
And something big is brewing.

After defeating Swarm in a breath-taking stand-off, Nate has been arrested for his murder. In prison and isolated, he can’t use his powers of influence at all. Flicker, Chizara, Kelsie and Ethan are on the run and in hiding from the FBI who believe the Cambria Five are domestic terrorists. And Agent Phan and the FBI have a secret weapon up their sleeve – a teenager with a superpower that the Zeroes haven’t encountered yet.

Meanwhile, Sonia Sonic and her growing band of weird-hunters are tracking inexplicable events across the country – and their investigations lead them to New Orleans during Mardi Gras, where the celebrating crowds promise enormous power to anyone who can channel it. Time is running out for the Zeroes, but they must learn to trust each other again and combine their powers for good – to avert the looming disaster.

A brilliant, action-packed conclusion to the superb Zeroes series.

All my points from my review of the first book remain true. While it is very young adult perspective, there was enough adult material to hook me in.

I really like the idea of “networked” powers in this series. I was recently talking to a group of young people about the way they engage with social media, and I was blown away by what was essentially the sophisticated network theory analysis that they used to navigate that space. Rather than focus on individual posts or tweets, they seemed to hold a map in their head of a pattern of social media interaction from individuals they followed. They made judgements on authenticity and levels of accuracy based around these patterns. It was fascinating, and made the way the powers in this series work even more interesting as a reflection on this way of seeing the world. It made me feel old at the same time, but that’s my problem not the book’s!

The crisis level ratcheted up at an appropriate pace across the two books, with appropriately more powerful “bad guys” to stretch our heroes. What struck me though was how contained the story telling was. The progression seemed natural. Right up until the end, the stakes were high but not preposterously so. Of course, right at the end everything went a bit bonkers, with world changing consequences, but hey – this is speculative fiction. What’s not to like about a bit of bonkers? I could understand why some people might get put off by the sudden change in pace, but I liked it.

The level of teen angst was kept to a minimum, which I liked. That’s not to say there isn’t angst, but considering everything going on it was appropriate/proportional to the level of crisis.

The narrative voice for each point of view remained very consistent. I assume that the authors probably split up the work so that each author was responsible for different characters, but the overall effect worked. They seemed to work well together, and the work was well edited. If there were seams where one author ended and another began, they weren’t clunky, and I was well and truly able to suspend my disbelief.

Considering how over the top the last part of the last book got, I was happy with the ending. As a reader, I had a good sense of completion, without loose threads irritating me.

Overall, this is a good trilogy and one well worth your time, especially if you’re interested in a millennial take on super powers. Well and truly recommended.