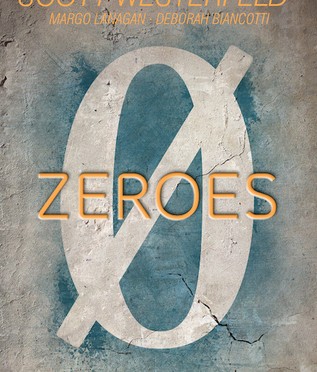 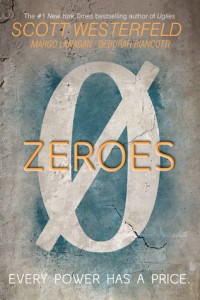 I am a big fan of Australian author Deborah Biancotti’s work. It particular, I really enjoyed a short collection of hers called Bad Power from a few years back (see my review here). Bad Power focused on the downside of having super powers, and ever since reading it I’ve been hoping for a novel set in the Bad Power universe. I’m still waiting for that novel, but let me tell you Zeroes by Deborah Biancotti, Scott Westerfeld and Margo Lanagan is the next best thing.

But these six Californian teens have powers that set them apart. They can do stuff ordinary people can’t.

Take Ethan, a.k.a. Scam. He’s got a voice inside him that’ll say whatever you want to hear, whether it’s true or not. Which is handy, except when it isn’t—like when the voice starts gabbing in the middle of a bank robbery. The only people who can help are the other Zeroes, who aren’t exactly best friends these days.

Enter Nate, a.k.a. Bellwether, the group’s “glorious leader.” After Scam’s SOS, he pulls the scattered Zeroes back together. But when the rescue blows up in their faces, the Zeroes find themselves propelled into whirlwind encounters with ever more dangerous criminals. And at the heart of the chaos they find Kelsie, who can take a crowd in the palm of her hand and tame it or let it loose as she pleases.

Filled with high-stakes action and drama, Zeroes unites three powerhouse authors for the opening installment of a thrilling new series.

I’m not usually a big fan of young adult work. While there is some excellent quality writing in the young adult genre, I find that the themes and characters in the novels are directed (quite correctly) at a much younger market, and as a result they don’t tend to resonate as strongly with me. Zeroes, however, did manage to hook me in. The protagonists are all teenagers, all born in the year 2000 and all in possession of superpowers. But their powers have serious limitations and they screw things up as often as they fix them, and I found that did resonate with me. My own (fading) memories of youth are of uncertainty, inexperience and getting things wrong. I think one of the reasons why I don’t connect with young adult books very much is that there is too much competence amongst the young characters who have no real life experience.

The take on superpowers in Zeroes is very cool, and very 21st century. The bulk of the powers rely on networking effects, amplified impact when groups or crowds are involved. In the age of mobile phones and social media, this move away from the awesomely powerful individual makes a lot of sense and is remarkably engaging.

All of the characters are flawed, there are no pure heroes to be had here. Greed, narcism and one character who is worryingly sociopathic – a full range of negative emotions and motivations are on display. So, I was surprised to find myself feeling a real connection to this set of characters – as a reader I wanted them to overcome their limitations, wanted them to become better. And the authors skilfully guide the character development to a satisfying payoff. No-one qualifies for sainthood by the end of the book, but there is real growth across what is a large cast of characters.

I was interested to see whether a book written by three authors could achieve the right level of consistency for a novel. I was pleased to find that I couldn’t really see the seams in the writing, it did feel like a cohesive book. I have read and enjoyed works by Lanagan and Biancotti, and this book had echoes of both but was very much its own thing. As a writer, I’m interested in their writing process, I understand that they put a lot of emphasis on achieving that consistency.

The plot itself moves along at a good pace, and I thought the authors effectively ratcheted up the tension by creating increasingly high stakes situations and good interpersonal interactions between the characters.

This is a funny book – lots of humour from the characters and plenty of amusing situations. I wasn’t necessarily expecting a strong line in humour, but it was refreshing and served to counteract some of the teenage angst that is necessary in even a well written young adult novel.

There was a good focus on diversity in the novel, with a good gender balance amongst the protagonists and a mix of ethnicities and a disabled character. The novel isn’t preachy about diversity, but I’ve really been enjoying work that portrays a wide range of characters without making a big deal of it, and this book definitely fits that description.

Considering I originally picked up Zeroes partly to be a Biancotti completest, I had a very enjoyable experience reading this book. Highly recommended for young adult readers and people who like their superheroes flawed and very 21st century.

One thought on “Zeroes by Scott Westerfeld, Margo Lanagan and Deborah Biancotti – a review”