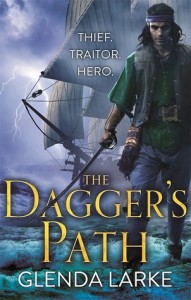 The Dagger’s Path by Glenda Larke is the second in her The Forsaken Lands series. I reviewed the award winning first volume The Lascar’s Dagger earlier in the year.

The Dagger’s Path continues on pretty much straight after the end of the events of the first book. Without giving too much away for fear of spoiling the first book, the primary thread is about the main characters attempting to return something to the Va Forsaken hemisphere, which is an archipelago in warm climes. We also find out a lot more about the plotting in the Va-loved hemisphere.

Most of my general comments about the setting of the first book apply here too. The spice trade with sailing ships in tropical islands is a different setting from many other fantasy series, and remained fresh throughout this second book.

This is not a stand alone book, and I would imagine it wouldn’t make much sense if you haven’t read the first one. Like many second books in trilogies, it also serves to set up some big confrontations for the third book.

But despite that, the book moves smoothly. Tension is executed well, the book has its own incidents to deal with and there is more than enough action to go around. The characters evolve over the course of the book, although I still struggle to reconcile the behaviour of the main character (Saker) with the description he was given when he was first introduced. However, his competency develops through this book and the original introduction of the character was long enough ago that I wasn’t as bothered by it this time around.

The scene is being set for a good conclusion, which I guess is most of the job of a second book. Looking forward to reading the next book in the series when it is released.