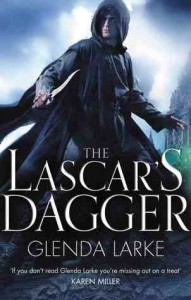 The Lascar’s Dagger by Glenda Larke first came to my attention by being nominated for both of this year’s major Australian SF awards – the Ditmar (voted) and the Aurealis (juried). I must admit, while I was vaguely aware of Larke’s name before seeing the nominations, I hadn’t had the chance to read any of her work.

Larke has chosen an interesting setting for this series. While based in a secondary world, it has an 18th century kind of feel to it, in particular around the heyday of the spice trade. The major powers in the equivalent of Earth’s northern hemisphere (socially/politically) are in a race to capture the spice trade from an archipelago of tropical islands. Political and religious forces vie for supremacy.

Religion is portrayed in interesting ways. A Christian-analagous monotheist religion (worshipping “Va” and opposing “A’Va” – the devil) has explicitly incorporated existing religions that have a more druidic feel. When the novel starts, the bricks and mortar part of the church (town-based, worship in built churches) has started to edge out the more nature based parts of the religion. It is a good reflection on how many successful religions spread by coopting local religions in the countries they conquered. It also sets up some fascinating internal conflict.

The magic system centres around the concept of “witcheries”. These witcheries are granted by powers that seem to be linked to nature (the tree-based religion of one region, the water based religion of another, the tropical island based beliefs of a third region). The witcheries are granted to people who give themselves over to serving the land/water, and are usually based on the need of the person at the time they make the bargain. One character, for instance, is desperate to hide when she bargains for her witchery, and she gains the power of glamour, to hide herself or reshape her appearance. These narrowly defined powers with specific purpose make for interesting impacts on the storyline, and the characters are forced to be innovative within the range of their abilities. The motivation of the powers also seem focused on self preservation of the land/water/island – you are granted the power only so long as you are acting in the best interests of the natural world. This is reflective of the strong streak of environmentalism/conservation in the book.

A second magic, sorcery, is hinted at as a long extinct power, but in a way that telegraphs it will probably return during this series of books. I’m sure there will be more made of it during future books.

The plot is solid, with some good old fashioned conspiracies and hijinks. There is a great sense of fun in many of the segments, and the interplay between cultures is highlighted in interesting ways.

Sakar Rampion is the main protagonist. Interestingly, the way he is described in the first few pages (as a sort of loveable rogue) doesn’t actually play out in the way the character is represented across the rest of the book. I didn’t dislike Sakar as a character, but I had a slight sense of dislocation when the expectations set at the start of the book weren’t really met. And for a smart guy, he certainly did some dumb things.

One of the other main characters, Sorrel Redwing, made up for my slight disapointment in Sakar. Sorrel has by far the more pronounced character arc, going from a somewhat timid and grieving housewife to an active character with a lot of agency.

Ardhi (the “lascar” of the title) is from the island nations and while he isn’t in it much, those parts seen from his point of view are a valuable “fish out of water” insight into the setting and cultures of the book. He also gives tantalising hints of back story all the way through, as the reader slowly pieces together what happened and how he ended up on his quest.

Some of the other minor characters ran along the fine edge of cliche (the playboy prince not wanting the responsibility of the throne, the resentful princess being married off for political advantage, the wise old shrine keepers etc). However, Larke injects enough freshness into her prose that even these characters had an energy which I found engaging.

All up I really enjoyed The Lascar’s Dagger and will be reading the sequel later in the year (it is out now). Recommended, especially if you are keeping up with Australian fantasy this year!

A few days after posting, The Lascar’s Dagger took out Best Novel in the 2015 Ditmars, in a tie with Trudi Canavan’s Thief’s Magic.

One thought on “The Lascar’s Dagger by Glenda Larke – review”