Skip to content
So, as regular readers of this blog know I’ve been helping out with a podcast called Galactic Chat, in which we interview people in the speculative fiction field. Usually authors and usually Australian, although not exclusive on either front.

Recently, our podcast was nominated for a Ditmar (which are the Australian national voted speculative fiction awards) in the Best Fan Publication in Any Medium category. It was a great honour to be nominated, however we were up against some absolutely fantastic competition (the likes of Galactic Suburbia, The Writer and the Critic, The Coode St podcast – all of which are up for the internationally recognised Hugo award this year). I don’t know about the others, but I spent quite some time practicing my gracious loser face, in case the television cameras panned to me when they announced someone else won.

(What do you mean it wasn’t broadcast on national television? What about local television? You mean that was just some guy with his own video camera? Sheesh)

There were a lot of awards to give out (the Victorian Chronos Awards, the Ditmars and a few additional individual awards that defy classification), but MC’s George Ivanoff and Narelle Harris did an excellent job keeping things moving. Soon enough we got to our category, and I sat in the audience with what I hoped was a congratulatory grin on my face.

And then we won!

It was a shock, I can tell you. Sean Wright, our intrepid leader and absolute backbone of the Galactic Chat podcast, led us up on stage and before I knew it we were each being handed a trophy. 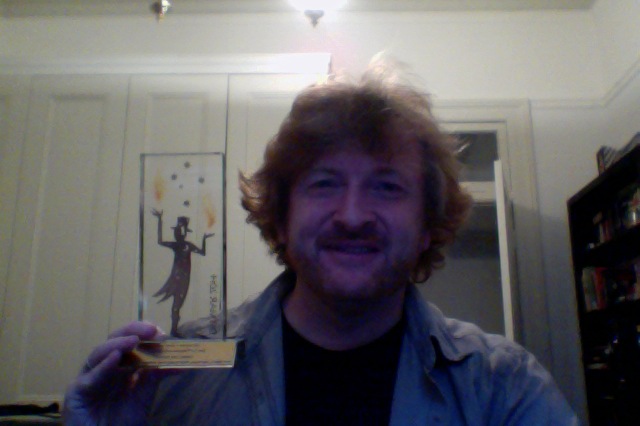 As you can see from the photo, it is a very pretty trophy.

Sean and Alex did the talking for us on stage, but I’d like to use this post to thank my fellow interviewers (Sean Wright, Alex Pierce, Helen Stubbs and David McDonald) and in particular thank our fellow nominees – I listen to all the other podcasts and always take a huge amount of enjoyment from them and both fanzines listed have a long and distinguished history in the Australian speculative fiction scene. I’d also like to thank Jason Nahrung and Keith Stevenson, who were the very patient subjects of my newbie interview techniques during the qualifying period.

Congratulations to all the winners on the night, in particular Sean Wright who also took home the Best Fan Writer award.

And most importantly, thank you to everyone who voted for us. You know who you are.

For a full list of all nominees, you can go here. At the time of writing, a list of the full results hadn’t been published, but I shall come back and edit this post when they have.

The results are on Wikipedia now.

2 thoughts on “And the winner is…”