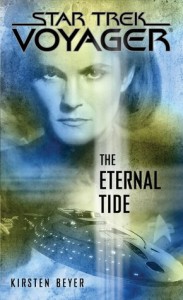 The Eternal Tide by Kirsten Beyer is the latest Star Trek Voyager novel. I don’t think I’m giving anything away to say that this novel deals with the return of Kathryn Janeway to the Star Trek universe (her picture is on the cover after all). Janeway was killed off quite some time ago, and it does feel like the last few novels have been building up to this return.

I’ve been mildly enjoying the Voyager relaunch series. As I mentioned in my review of  Children of the Storm by effectively cutting Starfleet down to nine ships sent off into the Delta quadrant, Beyer has created some containment to a story universe that seemed to be expanding out of control.

Janeway is returned in really the only way possible, by the intervention of the Q Continuum. She was pretty definitively dead, so Beyer had to go even further than the device used to bring Spock back in the Star Trek movies. Given the constraints, it was understandable but I’ve been a little disappointed in how the books in the Star Trek universe have backtracked on getting rid of major characters (I’m thinking and Sisko and Janeway mainly here). It feels a bit like caving to fan pressure, rather than good story telling.

I’ve been hoping that the characters in the Voyager reboot get some decent character development. However, I’m not entirely convinced that they do. To a large extent it seems the purpose of the last few books has been essentially to restore everyone to their previous role, but bumping them all up a grade (everyone wins a prize).

(I’ve got to say, the “Tom and B’Ellana have the perfect child” subplot was really starting to grate by the end of this novel. Everyone thinks their child is perfect, but 99.99999999% of the time they are not. Again this feels like the author is a new parent still very much in awe of their own child, and it’s about as welcome as a new parent talking about their “amazing child” at a dinner party. I hope future books can move past it, the characterisation is very irritating)

Having said all that, there was some very interesting plot in this book. I was intrigued by the back story of Fleet Commander Afsarah Eden and I did like the treatment of the Q Continuum. Beyer is not afraid to kill off characters and has winnowed away a lot of the excess, leaving a manageable cast of main characters for future books. I thought the main story thread here (once you remove the stuff primarily designed to justify Janeway’s return) was good.

For fans of Voyager and Captain Janeway, this will be a must read. If you haven’t been reading along on the reboot, this isn’t the place to start.