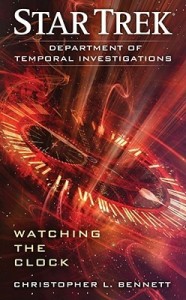 Watching the Clock by Christopher L. Bennett represents a thread of the Star Trek universe, where a couple of once off characters from an episode of Deep Space Nine. The two characters (Lucsly and Dulmer) represent the somewhat bureaucratic Department of Temporal Investigations and become the core of a novel based on said department’s operations.

I don’t actually mind the conceit, I remember those two characters and the idea of exploring the bureaucratic side of the Star Trek universe appeals to my public servant side. I could well imagine the need to have operatives with a serious lack of imagination when attempting to preserve the timeline.

Despite my enthusiasm for the concept, Watching the Clock‘s primary purpose seems to be to provide an underlying theory of time travel that allows all of the crazy time travel episodes across all of the various incarnations of Star Trek to make sense. There are a lot of “in jokes” (this is not the Star Trek novel to start with if you are only casually acquainted with the series) and generally there is a sense of trying to hard – the novel bends over backwards to try to explain things. It feels a little bit like a group of physics nerds got together, had a few drinks and tried desperately to explain Star Trek time travel while drunk.

As a result of trying to explain a lot of different events plus introduce a lot of new characters, the book feels like a series of short stories only vaguely linked together.

Having said all that, the writing is reasonable and I actually quite liked the ending. I’m in two minds about whether to try the second book in the series – I vaguely hope that with the need to explain time travel out of the way, there might be scope for a good single novel length story.

If the glaring inconsistencies with the treatment of time travel in Star Trek has always bugged you, this might be the book that allows you to put some demons to rest. If you’ve been happy to just take the time travel episodes on faith without thinking about them too hard, the attempts to explain will probably annoy you. If you don’t really watch Star Trek, I’m extremely surprised you’re still reading this review.