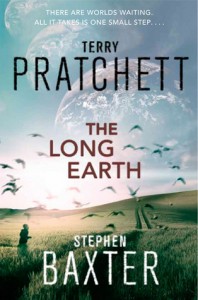 The Long Earth by Terry Pratchett and Stephen Baxter takes the idea of parallel worlds to a whole new level. People learn how to step between worlds with the aid of a simple device (powered, may I say, by a potato), and find that our version of Earth is the only one in which humanity evolved.

You can’t take any form of iron between the worlds, which at least slows down humanities attempts to exploit the resources of these other Earths. Still, it is not long before settlers start moving out, settling worlds that are very much like our own except completely unpopulated.

The story centres around Joshua, a natural stepper who can move between worlds unaided, and Lobsang, an artificial intelligence claiming to the reincarnated soul of a Tibetan mechanic as they explore further and further out from the “original” Earth. There is something million’s of Earths away causing trouble, and our intrepid team are going to find it.

The novel also explores the way in which society fragments once natural resources become essentially limitless, and the attempts of those in power to maintain control (I particularly liked the fact that the US government claimed all versions of the American continent in an infinite number of Earths as being sovereign territory, despite having no way to police the claim).

The story itself is well written and compelling enough to keep the reader engaged. It was slightly disconcerting to have flashes of Discworld-esque humour that were clearly from Pratchett pop up through the story, but apart from that the writing styles of the two authors tended to mesh well. The voice of Joshua, from whose point of view most of the story is told, was engaging.

Each of the Earths has different conditions, where evolution or climate or even continental development has gone differently (without giving anything away there was one particular set of conditions that occurred to me early on – I was very happy to see those conditions actually occur later in the story). This setup allowed the authors to play a continuous “what if” game, it must have been a lot of fun to spend time imagining all these different Earths.

There was an interesting use of minor characters. A character would be introduced, some back story told and then a little mini-story outlined, usually just to illustrate some aspect of the social and/or economic changes happening in the world. The character then effectively vanishes from the story. While this allowed the authors to show the impact stepping is having on the world from a different point of view, it did make it hard to invest in feeling connected to characters in the story. Some of the minor characters reprise their roles briefly later, but others just seem to die away. I can’t decide whether it was an effective way of showing a broad view of the world beyond the knowledge of the main characters, or if it was just irritating.

Overall this was a good, fairly light read that I suspect may be the beginning of a series. Recommended.