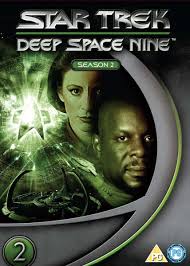 In season 2, I was really struck by the ongoing commentary on feminism. You’ll be shocked to hear that this wasn’t something I remembered from the first time I watched the show (I was a young bloke in my late teens/early 20s in the 90s – I wasn’t thinking about feminist issues anywhere near as much as I should have been). Looking back now, I can see that the show was influential in  introducing concepts that are now part of the more mainstream conversation on challenging the traditional role of women in society.  I suspect I have a lot to thank DS9 for – by introducing these concepts by “stealth” I think I’m a much better person today than I might have otherwise been.

Some of the commentary was quite explicit – for instance the treatment of Ferengi woman in the episode “Rules of Acquisition”. But the commentary lies throughout the whole season, often highlighted by conversations between the Kira and Dax characters in particular. The season as a whole very definitely passes the Beckdel test!

The individual characters were interesting as well. The Dax character, having been hosted by male and female characters over its lifetime, allowed for interesting contrast points between the genders. The Kira character was a fascinating blend of character traits – fierce and aggressive warrior who embraces her sexuality. Even the minor characters reflected this commentary, for instance the struggles of Keiko O’Brien – a professional scientist who made a career sacrifice, but was miserable doing it.

Another thing that struck me was the lack of neat endings throughout the season. Issues were left not fully resolved, or at least with a less saccharine ending. For instance, in the episode”Cardassians”, a young Cardassian boy who has been raised by Bajorans is sent back to Cardassia rather than being allowed to stay with his adoptive parents. Odo and Kira’s discussion about trust at the end of “Necessary Evil” is another example where a relationship is deepened by not giving the obvious resolution.

And while this season is still quite episodic, there was a three episode storyline! Two “To Be Continued” endings!! At the time, I was amazed. Sustaining a story over three episodes of television seemed incredibly ambitious. Now it is par for the course to see story arcs that last across whole seasons, but back then I was very impressed. It was a hint of things to come, as DS9 started to pioneer longer and longer story arcs in later seasons.

The introduction of the mirror universe in “Crossover” was a lot of fun. The over-the-top acting, the bat-shit crazy Intendant, humanity as second class citizens and slaves – its a wacky rollercoaster ride.

A fantastic season of a fantastic show! What memories do you have? Any other DS9 fans out there?