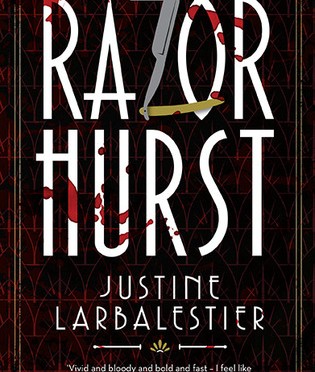 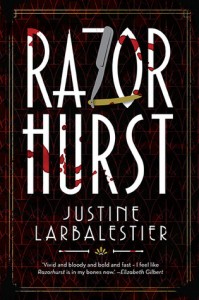 Razorhurst by Justine Larbalestier won the Aurealis Award for best horror novel in 2015 (I try to read the Aurealis and Ditmar award winning novels as a way of keeping in touch with the Australian SF scene).

I remain too lazy to recap storylines, so from the Goodreads blurb:

Kelpie knows the dangers of the Sydney streets. Ghosts have kept her alive, steering her to food and safety, but they are also her torment.

Dymphna is Gloriana Nelson’s ‘best girl’, experienced in surviving the criminal world, but she doesn’t know what this day has in store for her.

When Dymphna meets Kelpie over the corpse of Jimmy Palmer, Dymphna’s latest boyfriend, she pronounces herself Kelpie’s new protector. But Dymphna’s life is in danger too, and she needs an ally. And while Jimmy’s ghost wants to help, the dead cannot protect the living . . .

One of the things that really struck me about Razorhurst was the authenticity of the writing. The novel is set in Sydney Australia in the 1930s, and the story has a verisimilitude that leaves the reader with the impression that Larbalestier undertook a hell of a lot of research.

Geographically the story is set very near to where I live, and it was amazing to peek into the world of Sydney just 80 odd years ago, and reflect on what an incredible century of progress there has been. The Sydney of the novel is a dark and gritty place, where the poor don’t stand much of a chance to make much of their life. I found it odd walking the streets of modern inner-Sydney and comparing it to the world of the book, seeing hipsters where there used to be beggars, and trendy cafes where there used to be slums.

The two point of view characters, Kelpie and Dymphna, start the novel seemingly worlds apart. Kelpie is a street urchin, slowly starving, stunted from malnutrition and barely getting by, plagued by the ghosts that haunt the streets. Dymphna is a beautiful young woman, one of the most sought after prostitutes in Sydney. The dynamic between the two creates the tension that drives the action. Without giving too much away, there were a few twists that highlight the differences and similarities between the two in startling and thought provoking ways. The choice of point of view characters and the time period allowed for some interesting exploration of issues of misogyny and empowerment.

The story rockets along at a good pace, with enough twists and turns to keep the reader very interested. The secondary characters are well fleshed out, and the dialogue sharp. The use of the supernatural elements of the story are kept on a short leash, and the story cleaves more towards historical fiction than speculative. This is not horror in the “bump in the night” style. The scary characters are not the ghosts, but rather the very-much-alive human beings that populate the seedy underbelly of Australia in the Great Depression.

Overall this is a highly readable historical fiction, with some subtle supernatural themes. Well worth checking out, especially if you are a resident of Sydney.

3 thoughts on “Razorhurst by Justine Larbalestier – a review”