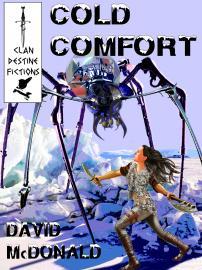 David McDonald is an Australian speculative fiction author on the rise, with a lot of short fiction credits to his name and even a recent announcement of a novelisation of a Canadian movie in the works.

Cold Comfort and Other Tales is a collection of three of his science fiction short stories from Clan Destine Press, consisting of two reprints (Cold Comfort and Through Wind and Weather) and an original story (Our Land Abounds).

The first story, Cold Comfort, is based on a post apocalyptic Earth where the planet is covered in snow and ice, with the remnants of humanity confined to a series of giant domes, each a heated oasis in a desert of cold. The main character, Vanja, is a trader, moving from dome to dome to make a living and in search of knowledge about the past. Vanja is a strong female protagonist, in a world where societies in each dome have reverted to more primitive forms and in many cases don’t smile on women taking an active role. She uses a mixture of guile and sheer competence to make her way, which makes her a very sympathetic main character.

I liked the world building here, with society reduced to “cargo cult” status, eeking out an existence utilising the technological infrastructure of the past without understanding how it works. It built to a very satisfying conclusion, and I could very well imagine a longer story set in the same world.

The second story in the book, Through Wind and Weather, is quite short, almost a vignette of a pilot, Nick, seeking the help of a sentient spaceship to deliver vital supplies to a colony world. In order to get there, they have to navigate their way through a massive solar storm. The story was originally written for a themed collection (I won’t tell you the theme – it would ruin the end). In some ways it is a flash fiction piece, built around a single idea. However, once again McDonald has sketched in a broader world with a few deft strokes. I could well imagine more stories set in the same world.

The last story in the collection, Our Land Abounds, is original to the collection. In current Australian politics, there is a lot of debate over our approach to immigration. As a country whose modern structures are built on an immigrant population (recognising of course that we have ancient structures built on the worlds longest continuing culture), we continue to debate levels of population and immigration as a fundamental building block of our future. Successive governments have grappled with controversial issues around unsanctioned immigration of different types. I’ve noticed that this debate has continued in the fiction of various Australian authors.

McDonald posits a world where Australia’s isolation has worked to its benefit, and in the face of global catastrophe the new Republic of Australasia has become an oasis of relative plenty. In order to deal with the swarms of refuges now trying to reach the country, Australia has adopted a strong military presence around their borders. Inside the country, a much more nationalistic culture has taken root. The story follows an officer in the border patrol, as he deals with a refuge’s story that hits a little close to home.

It is a good story well told, although I suspect that it needed a little more space to reach its full potential. The main character’s arc felt a little forced and with a little more space it may have resolved a little more naturally. I’d also be interested in how an international reader engaged with the story, if not exposed to the current Australian debate (feel free to leave a comment below!).

McDonald is an upcoming author to watch in Australian circles, and this short collection is an excellent way to engage with his work if you haven’t had a chance to before. Highly recommended.

Disclosure: I do a small amount of work with McDonald on the Galactic Chat podcast. I don’t think that has impacted this review, but who knows?

It turns out that McDonald’s new novelisation referenced above is out already (blame my faulty research). The novel is called Backcountry, and can be found here.