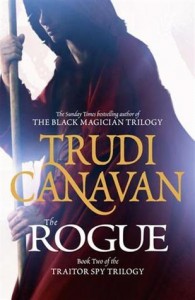 The Rogue is the second book in the Traitor Spy trilogy. I reviewed the first book, The Ambassador’s Mission, here.

The story follows straight on from The Ambassador’s Mission. I found myself gravitating towards the “home” plot, involving Cery the thief, Sonea the Black Magician and some internal shenanigans in the Guild, rather than the one that followed a trail of international intrigue. Still, The Rogue expanded even more on the politics wider world and introduced some tantalising glimpses into other societies, which I found quite interesting. Canavan has created a complex and intriguing world and I’m sure there was a depth of world building that went on to create such a coherent narrative.

As with the first novel, the pacing was a little slow for me. At the end of the day I just wasn’t worried for the main characters. I suspect this was one of the reasons that I warmed to a sub-plot involving a new character tricked into learning black magic. As the character was new, I wasn’t as certain that they’d survive, and that added an extra dollop of tension, which I quite liked.

Great to see a normalisation of homosexual relationships, with the same attention given to the gay character’s love life as the straight ones.  Truth be told, there were points where I found all the relationships a little vexing (“you’re the Ambassador man, no good can come from sleeping with a senior official in another government!”) but then I’m becoming a cranky old man (who apparently dislikes other people’s happiness) faster than I’d like.

All in all a very solid middle novel to an enjoyable trilogy.

One thought on “The Rogue by Trudi Canavan – review”