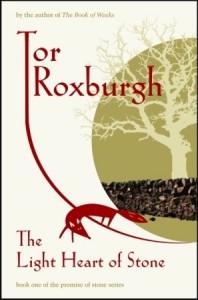 I was first made aware of The Light Heart of Stone by Tor Roxburgh through this excellent interview that Sean the Bookonaut undertook with Roxburgh in episode 15 of the Galactic Chat podcast. If you’re an Australian fan of fantasy novels, I defy you to listen to that interview and not be interested in picking up a copy.

The interview also contains some interesting comments about a previously published author’s path to self publishing. Roxburgh has brought an impressive degree of professionalism to editing and the publication process for this novel – there is nothing amateur about it at all (down to the excellent cover which is worth a second look once you’ve read the novel, fantastic representation of the main participants in the narrative).

I’ll summarise the story using the blurb from the website: “11-year-old Fox lives in Kelp province where her father is the Indidjiny keeper of the land and sea. When the 84-year-old Oak Companion arrives to test the camp’s children for talent, Fox finds herself wrenched from her family, forcibly adopted into the famous Oak clan, and thrust into the slow culture of the city of Komey. Fox’s adoption should signal a life of bound motherhood, aimed at returning her talent to its rightful owners, but nothing is as it seems. The Companionaris’ ability to grow plants and breed animals is failing, a murderous ambition has been sparked, and there is a stirring of old magic in the air.”

The themes of this novel are very thought provoking, especially for Australian readers. This is the first time I can remember reading a fantasy novel that is clearly set in another world, but uses Australian tropes and themes to inform the world building. Here we have a “civilised” colonising force and an indigenous population that is more nomadic in nature and close to the land. You have a “technological” advantage (the ability to boost the agricultural capacity of the land), issues of land rights, stolen children and the threat of slavery.

This could have easily become a thinly disguised diatribe on the state of modern Australia’s race relations. Fortunately, through most of the novel Roxburgh has put the story first and created an engaging narrative where the parallels with the modern Australian context add depth to the novel without overwhelming it. I was impressed with Roxburgh’s attempts to portray the motivations of the various characters and factions sympathetically. I think this is what prevents the novel being too over the top – if there were simple answers to some problems they would have been solved years ago, and Roxburgh does an excellent job of expressing that complexity through her characters.

Towards the end of the novel, some of this complexity is lost and the “goodies and baddies” become more starkly drawn. I can see this was probably a narrative necessity in order to bring the story to a close, but it would have been good to keep some of the ambiguity and complexity all the way through the narrative.

This sense of looking at an issue from multiple points of view is picked up by Indijiny practice of telling four stories when examining an issue – the first story describing the story teller (because there is no such thing as an unbiased narrator), the second and third stories telling about the issue from two contrasting perspectives (the more contrasting the better) and the fourth story attempting to tie the issue together by drawing on a story from mythology or fable to capstone the process. This sense of gaining broader perspective was an excellent addition and sounds like a good way to examine all issues to me!

The characters are very three dimensional and developed well over the course of the novel. There is an excellent sense of place, the continent is as much a character as anyone else and the rich descriptions help orient the reader. Again, the description of the landscape resonated very strongly from an Australian context.

As an atheist, I quite liked the religion of the colonisers – the concept of a god who turned its back on people once they grew up and left them to fend for themselves. If you’re going to have a god, you may as well have one defined by its absence.

The novel is the first in a series, and while the story stands alone reasonably well there are threads left untied to connect to future books.

I’ve commented in several parts of this review on the resonance I found between this novel and the Australian context. I’d be very interested in hearing comments from any non-Australian readers to how their experience of the novel changed.

I thoroughly enjoyed The Light Heart of Stone and am looking forward to the next book from Roxburgh. Highly recommended.