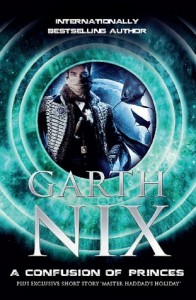 I have several Garth Nix books loaded onto my Kindle. Indeed, when I made a solemn vow to myself to read more Australian speculative fiction a couple of years ago, Garth Nix was one of the first names I came across. But somehow I never seemed to get around to actually reading any of Nix’s work. Not his fault, his books have just been the victim of my dreaded “to be read” list.

I also don’t read much young adult work. Mainly because I’m not young and have limited reading time – I prefer work that has been targeted at my demographic.

So A Confusion of Princes, being a young adult work by Garth Nix, would seem to have almost no chance of me actually reading it. Yet for some reason I found myself selecting it from my Kindle and plunging in.

The protagonist, Khemri, is a Prince of the Empire, gifted with superior technology (mektek), biology (bitek) and psychic ability (psitek). Raised in seclusion and guided to have a strong sense of his own importance, he is suddenly thrust out into the universe at large where he finds that his fellow Princes (all 10 million of them) aren’t the nice, honourable guys and gals his training has led him to believe. Many of them wish him dead, and aren’t above helping the process along a little.

This is a very readable book, I polished it off in only a few days. The universe sketched out is fascinating, with its Princes and (non-religious) Priests playing out politics on a galactic scale. But I chose the word “sketched” very deliberately, I would have loved to see the culture and operation of the universe expanded a bit more before Khemri begins his separation from it. Indeed, in many ways the story felt a little rushed. We didn’t see much of Khemri actually living the life of a Prince, therefore it didn’t have as much of an impact when he started to question the status quo.

The writing is very good, with a fascinating exploration of where technology might go and how things could be streamed together. I’m always interested in how authors envision that the politics and organisation of a galactic society – it is hard to imagine how you could maintain a cohesive government over such a large physical and societal space.

Khemri as a protagonist was interesting, but I must admit I found his “evolution” to be less convincing because of the speed with which it happened. While often clueless, he was self aware enough to defuse what might have otherwise been some irritating character traits.

The novel came with a short story about Master Haddard, Prince Khemri’s Master of Assassins. I thought it was a good stand alone story that showed a little more of the universe pre-Khemri.

Nix and associates built a prototype online game based around the universe that A Confusion of Princes is set in, but I understand it didn’t go any further. That’s too bad – the universe that Nix has created would suit a gaming vehicle. The prototype game can be found here.

One thought on “A Confusion of Princes by Garth Nix – review”