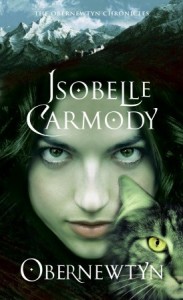 In a world struggling back from the brink of apocalypse, life is harsh. And for Elspeth Gordie, it is also dangerous. That’s because Elspeth has a secret: she is a Misfit, born with mysterious mental abilities that she must keep hidden under threat of death. And her worries only multiply when she is exiled to the mountain compound known as Obernewtyn, where—for all her talents—Elspeth may finally and truly be out of her depth. Then she learns she’s not the only one concealing secrets at Obernewtyn.

First, what I liked about the book. The setting was fantastic – far future post apocalypse world, but one where a great deal of order has been restored (no roving bands of blood thirsty mutants to be found). “The Great White” is described in almost mythical terms, leaving the reader to wonder how the world got from here to there.

The main character, Elspeth, is sympathetically drawn and brings the reader into the world in a very believable way. I enjoyed her growing exploration of her powers, and the slow reveal of the wider world around her as she progressed.

The writing is good at a sentence level, very engaging and easy to stick with. It was an easy read, and I had no trouble picking the book back up over the few days it took me to get through it.

The plot was interesting, but quite slow moving. In fact, it was probably the pacing that through me out of the book the most. I kept waiting for more to happen, which might be a sign that my mind has been ruined by too many action movies.

Another issue I noticed with the book was the lack of development of secondary characters. The view the reader gets is quite superficial, and given the main character can read minds, there really isn’t any excuse for that. Providing depth for secondary characters when you only have one primary viewpoint is something I struggle with in my own writing, so I sympathise. And the series has been very popular, so I assume we get to know more about the secondary characters in later books. But as a stand alone, this is something I found a bit distancing in my read.

Overall it was a solid read, and the start of a very popular series of young adult novels. Well worth checking out if you like a bit of young adult dystopia!