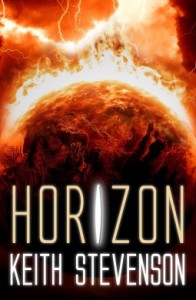 Horizon is the debut novel of author Keith Stevenson. Stevenson has been active in the Australian speculative fiction scene as a publisher through his small press Coeur de Lion Publishing, which has developed a reputation for publishing some excellent fiction (the anthology X6, for instance, collected a swag of awards). He has had several short stories published, but Horizon is his first novel length work. It has been published by HarperVoyager digital imprint Impulse.

(Disclaimer – I act as an affiliate for Stevenson’s free fiction magazine  Dimension6. I don’t think it’s impacted this review, but who knows? I don’t pretend to understand my own subconscious enough to be sure.)

The story centres on humanity’s first interstellar trip to explore an Earth-like planet, Horizon. Stevenson uses a range of plausible technologies to describe the means by which the journey is possible. It’s clear that he has thought a lot about the implications of interstellar travel with our current level of technology, including the impacts of relativity.

The crew has been in a form of artificially induced hibernation for the journey, and while they have only aged a little, half a century has gone by on Earth. The changed geo-political status on Earth has a profound impact on the parameters of their mission.

While there is a heavy emphasis on technical verisimilitude, at its heart Horizon is a character driven story. There is mystery (the novel starts with the mysterious death of the mission’s second in command), interpersonal tensions as the political situation on Earth changes relationships on the ship and some big ideas relating to our obligations to maintain an alien biosphere versus obligations to an Earth that is a materially different place to the one you left.

I enjoyed the writing, with clear and engaging prose which kept the story rocketing along. The use of a “who-dun-it” plot line was a great way to balance the other aspects of the book – without it, it would have been possible that some of the other themes (e.g. climate change) might have got a little preachy. Stevenson does a great job balancing these aspects of the story to make it accessible and keeping the reader engaged with the story.

I must admit that I did wonder at times how this crew was selected. There is a lot of interpersonal drama (very necessary for the story), but at times I did begin to question the competence of whatever psychologists signed off on this particular group of people to go into deep space together! The out of balance nature of the relationships can be somewhat explained by the deaths that happen and a last minute, politically motivated addition to the crew. But with billions of people on the planet, there weren’t people equally competent who were also a bit more psychologically stable?

Minor quibble aside, this was an excellent book that I enjoyed reading very much. There isn’t a lot of pure Australian science fiction, and Horizon does a lot to redress the balance.

A year and a half ago, I interviewed Stevenson for the Galactic Chat podcast. The interview is well before the publication of Horizon, but if you’re interested in the man behind the book, it contains some interesting insights. You can find the podcast here.

One thought on “Horizon by Keith Stevenson – review”