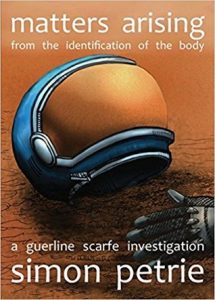 Another delayed review from a book I read a while back – I’m trying to catch up!

Tanja Morgenstein, daughter of a wealthy industrialist and a geochemist, is dead from exposure to Titan’s lethal, chilled atmosphere, and Guerline Scarfe must determine why.

This novella blends hard-SF extrapolation with elements of contemporary crime fiction, to envisage a future human society in a hostile environment, in which a young woman’s worst enemies may be those around her.

‘Matters Arising’ won the 2018 Sir Julius Vogel Award for Best Novella or Novelette, and was shortlisted in the analogous category in both the Aurealis and Ditmar Awards.

This novella by New Zealand born/Canberra based Simon Petrie was recently re-released under his own imprint. Petrie has a series of stories based on a colonised Titan (one of the moons of Saturn), and while most of them are straight sci-fi, Matters Arising is a sci-fi/detective story crossover. Perhaps due to the number of stories he has set in this world, there is plausible, in depth world building that doesn’t overwhelm the narrative which is a great starting point.

For instance Petrie creates an interesting conceit, having an arm of the government work to establish the details of suicides to see if the society can learn anything from the circumstances. It is an interesting reflection on how culture/government might evolve in a constrained environment like a Titan colony.

In fact, Matters Arising packs a lot into the novella length. As well as setting a good pace, Petrie uses the extra space of a novella to flesh out the main character nicely, showing glimpses of family and other background information which creates a much stronger connection between reader and protagonist.

The mystery at the core of the story is intriguing, and the payoff at the end satisfying. The mystery itself depends on some of the technological advances outlined in the world building, which I like in a sci-fi/crime story. When the mystery could be set anywhere, it seems to defeat the purpose of using a futuristic setting.

All in all, I found Matters Arising a thoughtful, exciting piece, well and truly worthy of its award winning status. Highly recommended!