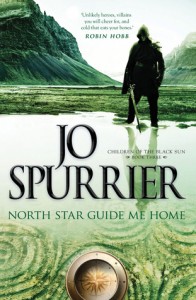 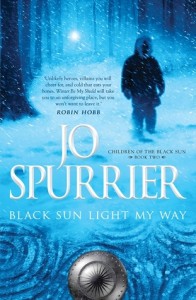 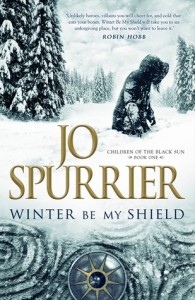 Winter Be My Shield by Jo Spurrier is the first book in the Children of the Black Sun trilogy. This was Spurrier’s debut novel and she has subsequently gone on to finish the trilogy.

This book has sat on my to be read shelf for a long time. I received it at an Aurealis Award ceremony a couple of years back, and it has sat staring accusingly at me from my bookshelf for all that time. And it is too bad that I waited so long to get into the book, because I really enjoyed it.

Spurrier has constructed a cohesive political and social system that sits on top of an interesting and imaginative form of magic. It took me a little bit of time to place the different countries and their relation to each other, but it clicked into place about a third of the way through the book. Something about the politics seemed fresh, I enjoyed the discovery process as we learnt more about the world.

The setting is well realised, the kind of biting cold that it is hard to imagine in Australia (or at least the parts of Australia that I’ve lived in).

It is not for the faint of heart though – the story is definitely on the grimdark end of the fantasy spectrum. There are some very cranky people that express their crankiness in some very direct ways. However the violence and grit never seem gratuitous, rather they add texture to the world.

It is a good start to a series and I will be reading the rest.