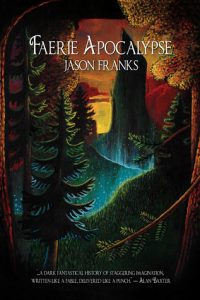 First a confession. I’ve been very tardy writing this review. Partly because the business of life has got in the way of me updating this site as often as I should, but also because I felt I needed to sit on this story for a while before writing down my thoughts. It is, without doubt, one of the most refreshingly different stories I’ve read in a while. I knew I liked it. But I had to think a bit about why.

This is the second book I’ve reviewed by Australian author Jason Franks. The first was Bloody Waters, a fantastic story about magic and music.

Over the centuries the Faerie Realms have drifted away from the mortal world. But for some, the Doors will open. For some, there is a Way to travel there, if they want it badly enough.

If they dream it hard enough.

In this era, only lovers, poets, and madmen can access the Realms of the Land–and for good reason.
A succession of mortals travel to Faerie: a veteran seeking beauty; a magus seeking power; an urchin seeking his wayward father; an engineer seeking meaning. These mortals bring the horrors of our age to the Land, and the Folk who live there respond in kind.

As the title suggests, this is not a pleasant dip into the whimsical world of the fey. There are few characters whose behaviour would lead me to call them sympathetic. Compounding that, Franks uses labels instead of names (“The Magus”, “The Mortal” etc) to create even more distance. For the first few chapters I found this a little off-putting. I didn’t feel engaged with the protagonist. I even put the book down for a few days. But Franks’ prose has the same deceptively simple, and beautiful, style that I loved in Bloody Waters and so I came back, and was quickly hooked.

And that was when I realised that the characters were not designed to be sympathetic, and the additional distancing actually allowed me to focus more on the impact they were having to the world(s) around them, rather than wasting energy on trying to relate. It also gave the whole text the feel of a fable, almost in the style of aural storytelling. I found the combination compelling, and once I got into the rhythm of the storytelling I gobbled it up in very short order.

Not withstanding all that, I did love reading the character of the Magus. A bad man by any standard, but I love Australian bad guys. Franks draws out the Australian-ness of the character to a level that should resonate with overseas readers, but doesn’t go too far into parody. In that sense, it reminded me of the writing of another favourite Australian author, Jason Nahrung. There are also a few little quirks that would particularly appeal to an Australian sensibility, for the local reader.

There is a lot of violence, to almost gratuitous levels. However the violence has a purpose, and underpins the story. It is an apocalypse after all. And each fight/battle/encounter is rendered so uniquely that the violence doesn’t seem repetitive at all. Still, if you aren’t one for a bit of blood and guts steel yourself before embarking on this particular quest.

The novel is made up of a few interlocking stories that build on each other. Franks uses the structure to pointedly comment on a lot of fairytale tropes, usually without much mercy. The gradual accretion of evidence of fey-dysfunction built slowly over the course of the stories also helps make the case for the conclusion.

While the first couple of transitions are a little jarring, by the end of the novel the different strands have come together and you have a connected narrative in your head.

Franks plays a bit with time, and as a reader your progress through the story is not exactly linear. However, I’ve been a sucker for this type of storytelling since I fell in love with Catch-22 at high school, and I found it added to the other-worldly feel of the novel.

As a minor aside, there is one section, based in the “real” world that is clearly set in the future. Franks does a fantastic job seeding the story with just a small number of specific details that flags this fact, without having the character dwell on futuristic things. It is a subtle, but brilliantly executed, piece of world building and although it is only a very small part of the story, I did enjoy it as both a reader and a writer.

A fantastic, original piece of work that I very much enjoyed. Franks has delivered another great read, which I highly recommend.