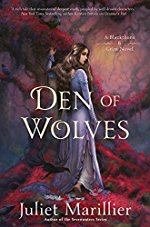 Den of Wolves is the third book in the Blackthorn and Grim series by Juliet Marillier. From Goodreads:

Feather bright and feather fine, None shall harm this child of mine…

Healer Blackthorn knows all too well the rules of her bond to the fey: seek no vengeance, help any who ask, do only good. But after the recent ordeal she and her companion, Grim, have suffered, she knows she cannot let go of her quest to bring justice to the man who ruined her life.

Despite her personal struggles, Blackthorn agrees to help the princess of Dalriada in taking care of a troubled young girl who has recently been brought to court, while Grim is sent to the girl’s home at Wolf Glen to aid her wealthy father with a strange task—repairing a broken-down house deep in the woods. It doesn’t take Grim long to realize that everything in Wolf Glen is not as it seems—the place is full of perilous secrets and deadly lies…

Back at Winterfalls, the evil touch of Blackthorn’s sworn enemy reopens old wounds and fuels her long-simmering passion for justice. With danger on two fronts, Blackthorn and Grim are faced with a heartbreaking choice—to stand once again by each other’s side or to fight their battles alone…

I’ve been a fan of this trilogy since the first book, The Dreamer’s Pool. Billed as a romance, the first two books focused more on the friendship between the two main characters. I enjoyed a story that didn’t rely on concepts of romantic love to redeem characters and found it quite refreshing.

In this final instalment, the regard between Blackthorn and Grim turns towards the romantic. It is very well portrayed romance, subtle and sensitive, but I must admit to being somewhat disappointed that the friendship wasn’t enough for the characters.

Having said that, I am invested enough in the characters that even the prospect of a happy-ever-after wasn’t enough to turn me off. Like the other two books, the story here is stand alone, although enhanced by the investment you’ve made in reading the other books. There is one overarching thread of story that has run across the whole trilogy, which is brought to a resolution.

The writing is excellent, with sharply drawn characters and beautiful, sometimes almost poetic prose. As well as Blackthorn and Grim themselves, other minor characters are deftly sketched – no fully rounded, but enough to move the story along.

The resolution of the overarching thread felt a little rushed and anti-climactic – I must admit to having thought that the whole last book might be dedicated to that storyline, but it was actually dealt with almost as an afterthought. It was still a reasonably satisfying, if somewhat perfunctory, ending.

If you’ve read the other books, you’re going to want to read this one. If not, even though the story does stand alone, I would strongly recommend starting this series from the beginning.