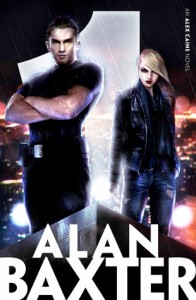 In service to my quest to read all the finalists for Best Novel in the 2015 Ditmar Awards, I next turned my attention to Bound, a dark urban fantasy by Australian horror and dark fantasy author Alan Baxter.

The story setup is relatively straightforward. Alex Caine is a cage fighter with a reputation for winning. He has the uncanny ability to read what his opponent is about to do a few seconds before they do it, which he puts down to lots and lots of training. But it turns out Caine is a wizard of sorts, albeit an untrained one. His capacity to read people is supernatural, and he is drawn into that supernatural world by a mysterious Englishman who tempts Caine with the promise of learning more about his abilities. Of course, things go horribly downhill from there.

With his new mentor dead and finding himself semi-enthralled to a powerful dark supernatural being, Caine is in a race to discover a power that might free him, accompanied by Silhouette, a first generation Kin (read Fae/Fairy) who takes a shine to Caine.

First up, this story is dark. There is violence. There is sex. There is swearing. There are kids in danger. If you don’t like those things, then this probably isn’t the book for you. I like dark fantasy, and it turns out dark urban fantasy is also my cup of tea. But I could imagine certain readers struggling with the content.

Caine is very competent all the way through the book. As well as being a gifted fighter, he is a magical prodigy of sorts and soon has his power augmented. While this does lead to a “training montage” feel to how he acquires skills so rapidly, it was kind of necessary given other choices Baxter makes. The story has a thriller pacing, moving very rapidly from action scene to action scene to keep the protagonists off guard and on the run. As such, it would have been very difficult to justify sending Caine off to Hogwarts for 6 months to really grapple with his newfound powers.

Also, Baxter matches Caine’s growing powers with some truly scary and bad-arse villains, ensuring that you always feel that even with all his rapidly accumulated power, he is still somewhat out of his depth. As such, Caine’s acquisition of power seems more natural while reading the book, and it was only really in retrospect that I contemplated the speed with which that power came.

Perhaps because of that thriller pacing, we don’t get a lot of Caine’s backstory. Again, that didn’t really bother me while reading the book – the action kept barreling along at a very satisfying pace. Baxter builds a very interesting world, with a comprehensive feeling history to many of the races/beings encountered. There are two more books in the Alex Caine series and it will be interesting to see how the world continues to grow and whether we find out more about Caine along the way.

Baxter himself is a highly trained martial artist who runs his own kung fu school, and there is a sense of authenticity in the fight scenes. I just hope he doesn’t have his real life students act out any of the more graphic scenes to ensure authenticity! Baxter is also the author of a short eBook called “Write the Fight Right” which I have found to be an excellent reference book.

All in all, Bound is a fast paced and very entertaining read for those with a penchant for darker works. Well worth a read.

4 thoughts on “Bound by Alan Baxter – a review”