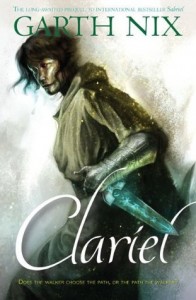 And now for a review of the last finalist for Best Novel in the 2015 Ditmar Awards, Clariel by Garth Nix.

Nix is an accomplished and successful Australian author. Clariel represents a return to his Old Kingdom series of young adult novels. He was recently interviewed by Alex on the Galactic Chat podcast that I am a (very) occasional contributor to.

For this novel, Nix goes back several hundred years before the events of his original trilogy. He tells the story of Clariel, a young women forced to move to the big city so her mum can take up a big career opportunity. She doesn’t want to go, and spends much of her time trying to find a way to run away from home and return to her beloved forest, which she loves. These themes of being forced down a path by your parents are relatively common in books focused on a younger readership, but I must admit they don’t really resonate with me.

I’ve given it some consideration, and I’ve decided I don’t know what to think of the character of Clariel. At times she was a bit one note, she was certainly selfish and self absorbed. It was an interesting study of someone who gets pushed out of the next into the wide world and utterly fails to cope with it. Nix has written some strong female leads in the other Old Kingdom books, it was slightly disconcerting to read what amounted to quite a weak character. It had that kind of character arc that I’ve begun thinking of as the Breaking Bad arc – where the main character is faced with a life crisis and choses to let it twist them into something horrible, rather than rising to the challenge. I kept hoping that Clariel would pull out of the death spiral. It didn’t happen. But still, there was something strangely compelling about following her down. In the end though, I ended up feeling quite neutral towards her.

I did, however, enjoy the fact that Clariel herself was asexual, and Nix portrayed that element very well. Given the amount of stuff that was happening to her, the ability to ignore romantic overtures was a blessing. Her inability to connect with other people emotionally both added to the depth of her character and to the plot – it made some of the mistakes she made more understandable and led her to ignore choices that would seem obvious to the reader. All in all, Clariel was a complex, but ultimately unsympathetic character for me.

The portrayal of the Old Kingdom 600 years in the past was engaging. I liked the apathetic nature of the Kingdom, a King who has given up ruling, an Abhorsen who would prefer to hunt wild boar than get anywhere near a dead spirit, Guilds ruling the roost. This made for a different setting than the previous trilogy, and I enjoyed exploring it.

One of my favourite elements of the previous novels were the interplay between the Old Kingdom and the mundane world. The mundane world didn’t get a look in this time, and I did miss that element. Still, given the timescale involved (600 years in the past) it wouldn’t have been the same kind of non-magical world anyway.

When I read the original Old Kingdom trilogy, I noted that there was a lot of head hopping between characters which I found quite distracting. It was the same in this novel, although given how accomplished a writer Nix is (I thought all other elements of the writing were superb from a technical perspective) I assume the head hopping is a deliberate choice. I’ve read a couple of novels aimed at younger readers recently, and I’ve noticed a similar phenomenon. Perhaps this is a feature of the genre? If so, it is a feature that I wish they’d discontinue.

Nix is an excellent sentence by sentence writer though, and despite the elements of the book I wasn’t keen on, I still found this a page turning read. I am very much looking forward to his next Old Kingdom novel, which starts off in the mundane world (I am led to believe).

If you enjoyed the other books in this series, I think you will enjoy this one as well. If you haven’t yet tried the series, I suggest starting at the start with Sabriel.