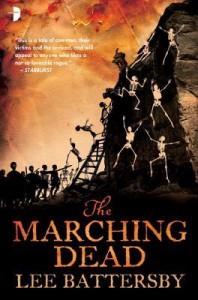 The Marching Dead is the second book in the Marius don Hellespont series. I read (and very much enjoyed) the first book, The Corpse Rat King, a little while back, so was very pleased to get my teeth sunk into the sequel.

First up I have to say that the things I loved about the first book were very much present in the second. Marius was still an excellent bounder and cad, although slightly less reluctant than in the first novel. The Marching Dead had a much wider cast than the first novel, but all the characters were well drawn and engaging.

And the writing was just as captivating as I remembered from the first novel. Witty dialogue and excellent descriptive text and galloping along at a frenetic pace. The humour in this book really engaged me – dark and biting at some times, downright silly at others. In some ways I felt that this book was trying to make more serious points than the first, but it was done in such an engaging manner that I hardly noticed!

Apart from that, my comments are very similar to my review of The Corpse-Rat King, so I won’t repeat myself too much. I will say however that I liked the ending. It was not romanticised and artificially sweetened, which brought the story together for me very well.

An excellent story and well worth the price of entry. Highly recommended.