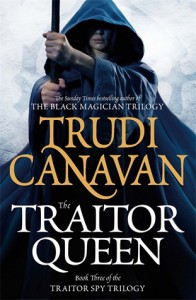 The Traitor Queen is the third book in the Traitor Spy trilogy. I reviewed the first book, The Ambassador’s Mission, here and the second book, The Rogue, here.

OK, so I’m starting to see the issue with reading all three books of a trilogy in a row and reviewing each separately – you end up with a lot of repetitive thoughts on the series as a whole. I think from now on if I’m going to read through a series consecutively I might do a single review for the whole series. Lesson learnt!

So, my feeling on The Traitor Queen don’t deviate much from my comments on the previous two books. Strong characters, good line-by-line writing, a little lacking on the plot/tension side of things, great world building and good attempt to integrate same sex relationships as a normal part of the world. If you’re interested in more thoughts on that front, I’d recommend my previous reviews (links at the top of this review).

In terms of a third book in a series, all the major plot points were closed off by the end. The final battle between the Traitors and the Sachakans happened, but was a little anti-climactic. I actually enjoyed the smaller scale drama of the roet/Thieves/Lillia storyline much better.

I quite enjoyed the sense that the Guild was having to adapt on many fronts at once – politically, technologically, internally. It gave a sense of change and time marching forward, which doesn’t always happen in a fantasy world.

Canavan has introduced several younger characters, and if she was to ever revisit this world again (which I don’t believe she has any plans to), I think leaping forward into the future and not focusing on any of the older characters at all would be the way to go. Anyi and Lillia would form a solid basis for a new series, especially if combined with dealing with the results of the world changes mentioned above.

Overall a solid series that I enjoyed reading.