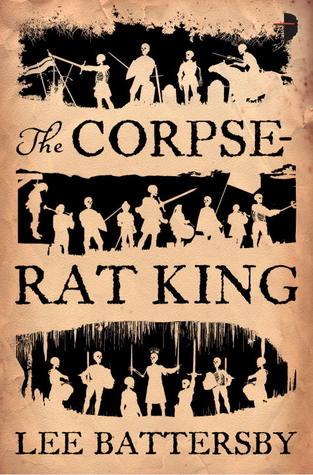 The Corpse-Rat King is Lee Battersby‘s first novel. Battersby has a fine pedigree as a short fiction writer and while I haven’t read as much of his stuff as I’d like, he comes very highly recommended by people whose taste I trust. The Corpse-Rat King was nominated this year for the Australian Shadows Awards (Best Novel) and the Ditmars (Best Novel).

And very well deserved those nominations were too.

First up I have to say that I found the characters very engaging. I particularly loved the character of Marius, who made for an excellent bounder, cad and reluctant anti-hero. While most of the rest of the cast had relatively minor roles, I did find that even the smallest character was very well drawn.

The prose itself was witty, with excellent dialogue. The whole book had me smiling – with even a couple of laugh out loud moments. Considering the somewhat grim subject matter at times, this is quite the literary feat. Seriously, where do all these people get their talent? I’ve been sending off coupons from the back of cereal boxes for years and I’m yet to receive any myself. Next you’ll be muttering something about hard work and natural skill. Well, where does that leave me? It’s a cruel world.

And speaking of cruel worlds, Battersby certainly doesn’t pull any punches in the creation of his. It is clear that a lot of background world building has gone in, so that even when the adventures get outrageously over the top, there is still a sense of depth to the world around him.

The Corpse-Rat King was in the Australian Shadows Awards for a reason – there is a lot of horror tropes through the books. Corpse strewn battlefields. The living dead. Sailing ships. It’s got it all. But while it is often justifiably placed in the horror section of the store, I would more put it in the “dark fantasy” category myself. You don’t need to be a horror aficionado to really enjoy this book.

Plotting wise this isn’t the tightest book I’ve ever read, but I only really felt that in retrospect. While actually reading it, I was delighted enough by the writing and dialogue that I just enjoyed the show (much the same way as I felt about Adam Browne’s Pyrotechnicon in fact).

Highly recommended. In fact, I’ve just ordered the sequel, The Marching Dead, on my Kindle (<insert deity of choice> bless the power of instant delivery).

2 thoughts on “The Corpse-Rat King by Lee Battersby – review”