Skip to content
This review sort of forms part of my contribution to the Australian Women Writers 2013 Reading Challenge. All my proper 2013 AWWC reviews can be found here.

I don’t think I can officially claim this as an Australian Women Writer’s challenge book, as only 6 out of the 13 stories are penned by Australian women. However, it show the work of many of Australian speculative fiction’s current batch of award winning female authors (think Kaaron Warren, Angela Slatter, Thoraiya Dyer, Sue Isle, Tansy Rayner Roberts, Sylvia Kelso), so I’ll probably promote this through AWW channels.

And in my mind I’ll count it as a 1/2 contribution to my target. 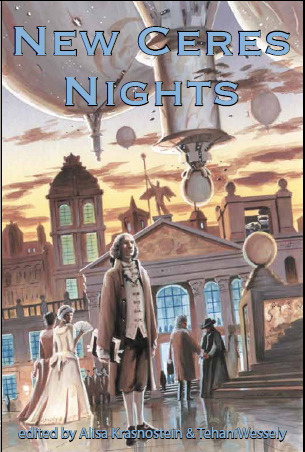 New Ceres Nights was published in 2009 by Twelfth Planet Press. The premise of the anthology is that the stories are all set in the shared world of New Ceres, a planet in the outer colonies that has embraced (and ruthlessly enforces) an 18th century way of life. Apart from a single spaceport connecting it to the rest of the human race, the technological level of the whole planet has been wound back.

I found the background to this anthology interesting. The introduction by New Ceres Board members Tansy Rayner Roberts and Dirk Flinthart, tells of a world built by an online community of mainly Australian speculative fiction writers, artists and fans. This was a bit before my time (as regular readers of this blog know I have only been involving myself in the Australian spec fic scene for the last year or two), but it seems like a fascinating experiment in using the internet to build community.

As far as I can tell, the New Ceres project is gone (all links seem to lead to dead-ends and defunct sites), so reading this anthology feels like a glimpse into a now departed phase of Australian speculative fiction history. A few other artefacts survive (such as the book Angel Rising by Dirk Flinthart) as well as some cryptic references to an eZine, but that is about it.

It’s too bad – I liked what I’ve read so far. It would have been fascinating to have a look at all the shared “source material” as well just to see how the world was constructed. It reminds me of a recent Kickstarter the Massive Fiction Project, which is aiming to build a shared world for fiction writing. I’m interested in these kinds of endeavours and constructs, would have been great to see an Australian attempt.

If any reader of this article was involved in the New Ceres shared world experience, I’d love to hear from you in the comments section below.

Anyway enough tangental musings, why don’t we return to the actual book. From the back blurb: “New Ceres Nights presents thirteen exciting stories of rebellion, debauchery, decadence, subterfuge and murder, set against the backdrop of powdered wigs, coffee houses, balls and duels”.

The mixture of 18th century limitations and illicit high technology made a surprisingly powerful combination, reminiscent of some of the better steampunk stories I’ve read. All the stories were quite good, I can’t really call out one I didn’t like. As is my habit, I’ll only comment on those stories where I have something to say – which is no reflection on the other stories of course!

The anthology also included the excellent:

All in all I found that I really enjoyed this anthology and have no hesitation in recommending it.

The good people at Twelfth Planet Press tell me that the cryptically referenced eZines from the New Ceres shared world days are being published as eBooks. The first was released just a couple of days ago. Good timing on my part, no?