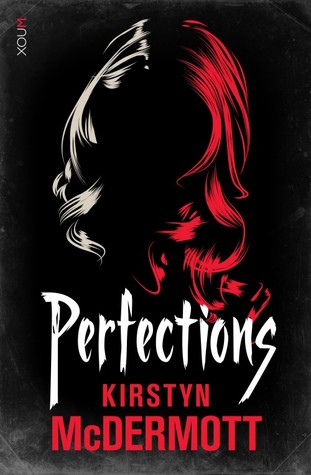 Perfections is Kirstyn McDermott‘s second novel, following the excellent Madigan Mine in 2011 (which I reviewed here as part of the 2012 AWWC challenge). The two novels are not related in terms of plot, although they do share a certain sensibility (which I’ve heard described by the author on her Writer and the Critic podcast as “modern urban gothic”). I enjoyed Madigan Mine, so have been looking forward to this release.

Perfections has been released as an eBook only from the relatively new Xoum. The quality was good, with only one typo jumping out at me. Given Xoum are also publishing a work from another of my favourite Australian authors (Blood and Dust by Jason Nahrung), they will be a publisher I’ll be keeping a close eye on in the future.

The blurb for the novel is Two sisters. One wish. Unimaginable consequences. Not all fairytales are for children. It’s hard to tell much more about the plot without giving spoilers, but it is one of those storylines that unfolds well. There are twists, but the twists felt natural. Rather than changes coming completely out of left field, I found that McDermott balances the foreshadowing well to ensure that when something was revealed my first thought tended to be “oh yes, in hindsight that is obviously what must have been happening”. That’s a difficult thing to get right – maintaining surprise while having fairly outrageous things feel natural.

There are some themes of emotionally abusive relationships, with hints of physical violence within those relationships. These themes are handled in a sensitive and nuanced manner, but are still very confronting.

There is a strong focus on the relationship between the two sisters. The characters are very engaging, this is something I noticed different from Madigan Mine where the characters were unsympathetic and in some ways difficult to engage with – I thought one of the strengths of MM was the way McDermott managed to drag you through the story despite the unsympathetic protagonist. In Perfections, the main characters (the sisters) are very sympathetically drawn, even when they are being slightly annoying. You want things to work out for them. And McDermott does an excellent job of playing on that sympathy as a source of dread for the reader.

Not all the characters in the book are sympathetic of course, and I thought the interplay between the minor characters was handled very well. Both the major characters went through significant growth, in particular in the nature of their relationship with others. The minor characters felt well realised, contributing their specific part to the story while staying three dimensional.

While the supernatural elements of the novel come in fairly early, the horror is more subtle, with less “jump in your seat” moments and more “stays with you and creeps you out at unexpected times in the future” moments. Stepping back from specific sentences and paragraphs, I found the writing generally to a) be beautiful and b) leave you with a slightly off balance feeling. Even in the sections of the book that are describing relatively mundane life, there is something about the way things are described that adds to the sense that there is something wrong, that things aren’t quite right.

This leads into the pacing, which was very good. I flew through the book and never felt that the pace dragged. Reading on the Kindle it’s easy to lose track of how far you are through a novel, I was surprised when I noticed I was almost at the end after only a couple of sittings. I put this speedy read down to a combination of wanting to resolve the mystery of the plot and my attachment to the main characters.

I loved the ending. Now, I’m not sure how much I can really say beyond that without giving anything away. But the ending does a great job of both resolving plot and character development.