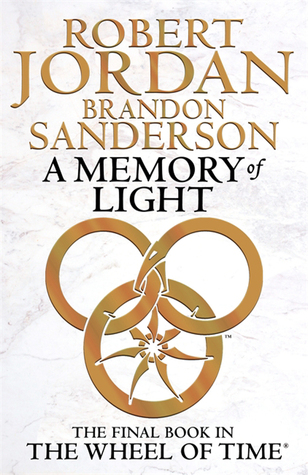 Like a lot of people I’ve been reading The Wheel of Time series for 20 years, so it was with a sense of great relief that I approached reading A Memory of Light, the last of 14 books. There must be at least between 2 and 3 million words in the series, and in my younger years I re-read quite a few of the earlier books, so I think it is fair to say that I’ve invested more reading effort into The Wheel of Time than any other fantasy series.

It is interesting looking at the books now – a lot of modern epic fantasy seems to have moved away from the clear “good vs evil” plots and characters, and show people in more shades of grey (I’m think of Joe Abercrombie, George RR Martin etc), so in some ways reading A Memory of Light (and the proceeding few books) is like stepping back in time to a younger, more idealistic version of myself.

I don’t really want to spoil anything, so I’ll restrict my comments on the plot to say that basically this is a 900 odd page description of the last battle between good and evil. There is a lot of heroic self sacrifice, huge battle scenes and general mayhem. If you haven’t read the proceeding 13 books, this is not the place to start. If you are thinking about reading the series, you better start at the very beginning. I’ll see you in about a year, then we can compare notes.

Interestingly in the first half of the book I actually found myself enjoying the thread associated with the Black Tower most of all, populated with relatively minor characters. I always wished the Black Tower storyline had been fleshed out a little more in the earlier books.

I suppose it was inevitable with so many story threads to wrap up, but the book switched between point of view characters at an extremely rapid rate. Some aspects of the plot resolution were expected, some surprising. Some threads seem to have been left by the wayside.

Sanderson has done a good job finishing off the series (even if he did turn one book into a very large trilogy). I hadn’t come across Sanderson before he took over the Jordan franchise, and I’ve enjoyed his other work (such as the Mistborn trilogy and more recently The Emperor’s Soul). While there is a detectable different in style between the first 11 books and the last 3, I don’t think the change was bad. In fact, I think it brought a freshness and energy to the end of the story which I quite enjoyed.

So to the main question: how do I feel about how the series wrapped up? I’m not sure. The finish was quite predictable in broad terms, but I was interested to see the specific endings for specific characters. It’s hard to say much more without spoiling, and the book is a bit too newly out for that. Once you’ve read the book, buy me a drink at a Con or something and we’ll hash it out.