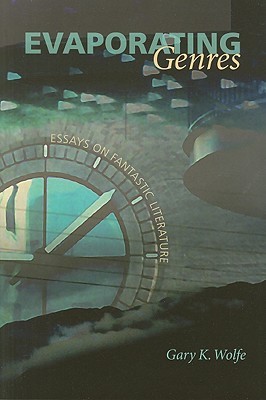 OK, I should start by saying it feels a bit funny writing down my thoughts about a book that rigorously covers the reviewing process. I’m not an academic, a well known writer or critic. I feel a need to note that I am one of those untrained, unskilled people who just whack up their opinions on their website in a fundamental absence of any comprehensive appreciation of the speculative fiction field and its history.

I came across this collection of essays as a part of one of my favourite podcasts, The Writer and the Critic episode 26, where it formed part of their “non-fiction” edition. I haven’t listened to the podcast yet (I wanted to finish reading first), but I’m almost certain that Kirstyn and Ian will have more interesting things to say about the book (well Kirstyn anyway – zing!). I strongly recommend checking their podcast out if you haven’t already.

Evaporating Genres contains eleven essays written by Gary K. Wolfe, well known speculative fiction academic (and presenter on the Coode St Podcast with Jonathan Strahan). Two of the essays are co-written with Amelia Beamer. The book interrogates the speculative fiction field and while it is hard to pick a single overarching theme (the essays have been written at different times and from different perspectives), as the title suggests Wolfe does often come back to the idea that most speculative fiction genres are difficult to define, especially around the edges, and that this fragmentation is part of what keeps the genres inventive.

The book itself is divided into three main sections:

I don’t intend to give essay by essay comments for a few reasons – I’d probably grossly misrepresent the arguments in the essays, it would take too long and there is a lot of nuance that comes from reading the detail that I would be incapable of replicating in a review. I will say that if you’re reading on a Kindle, the essays themselves finish at about the 62% mark (believe me, this is useful information). I have to be honest and say that I didn’t read all the footnotes.

Generally speaking I found the essays to be informative, thoughtful and articulate (although the language is a little dense at times). I don’t often read more academic subject matter, so it took a little while to get into the swing of the language etc, but the book does reward the effort. I found if I didn’t worry too much about not having heard of a lot of the writers/publishers/editors referenced, the general points made were intellectually stimulating and did lead me to do a bit more investigation into some of the earlier examples of speculative fiction. At the very least it has given me some context for listening to Wolfe in the Coode St Podcast!

Twenty-First-Century Stories was probably my pick of the essays. It investigated the work of many modern authors whose work deliberately pulls apart genre conventions. I’ve heard terms like slipstream and interstitial used a lot in podcasts and at conventions, but this essay was the first time I’ve really had a chance to grapple with the implications of those terms (and others like them).

Evaporating Genres (the essay for which the collection is titled) was also intriguing, providing the broadest coverage of the central theme of the collection (that speculative fiction genres are, by their nature, definitionally unstable).

Pilgrims of the Fall gives a fascinating glimpse into the world of academia and general review. Understanding the history of how more formal study of speculative fiction grew over the 20th century was interesting, but also gave me a new perspective on the tendency of speculative fiction to see themselves as outside the literary establishment.

I don’t have a thorough grounding in the history of the speculative fiction field, and I found reading these essays to be very valuable in giving me context for my own writing. You get a flavour of this kind of thing listening to the Coode St Podcast, but the essays are more comprehensive and explore ideas more rigorously.

However after some thought I’ve decided that as a writer there is some danger in reading an academic treatment of the field you write in. Namely, the academic has spent some considerable time underpinning their research with a solid foundation of theory. This can make it seem like the authors referenced were doing significant research/theoretical work to to ensure their novels took their rightful place in the speculative fiction canon. Meaning is ascribed to the work of those authors, where the academic has the benefit of both hindsight and history. As a result, I know I found myself wondering why I bother writing – I certainly don’t have the theoretical background to ensure that my work interrogates genre definitions so deliberately. However I comforted myself with the thought that many of the authors referenced may not have realised that was what they were doing until someone told them about it later. So there may be hope for me yet.

There is a lot for speculative fiction writers to think about in the definition of genres, more than I had initially thought. How much of what we write is subconsciously informed by the “rules” of the genre we have chosen to write in? How many of those rules are useful and exist for a purpose, or have evolved through a kind of literary natural selection? Where should we be rethinking them? And if those rules have evolved for a reason, what may be the unintended consequences of our departure from the norm? This collection has led me to think about these kinds of issues, which I’m sure will improve my writing in the long term.

Anyway, they are just a few thoughts on what is a varied and fascinating collection. Highly recommended, especially for speculative fiction writers.

Right, now I can get on with listening the the WatC podcast. As you were.