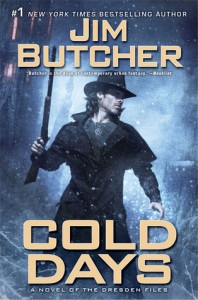 The books are very old fashioned action stories, in a “how much damage can the lead character take and keep on ticking” kind of way. Think Die Hard but with spells.

Cold Days is the 14th book in the Dresden Files series. If you haven’t read any (and this is not the jumping on point if you’re new), Harry Dresden is Chicago’s only wizard for hire. Down and out, unloved by the wizarding establishment, treated with suspicion by the police – the series started with Dresden as a noir style private investigator, with a paranormal twist.

Over the course of 14 books Butcher has steadily raised the stakes and extended the scope of Dresden’s adventures to almost unrecognisable levels. The world building has been extensive, cohesive and in a lot of ways very impressive. The various warring factions are well thought through. I assume Butcher hadn’t mapped out all 14 novels when he started out, but he’s been able to “retro-fit” a lot of world building so the previous stories make more sense as he builds more backstory into the later novels. It would be interesting to go back and read the first couple of novels to see if there are any glaring inconsistencies that time has dulled in my mind. I won’t, because my to-be-read list is scary enough without adding in a Dresden Files re-read. But it would be interesting.

While a few of the more recent Dresden books have felt a bit “papa needs a new swimming pool”, I’ve enjoyed the last couple of books. Butcher shook things up in the last novel (Ghost Story) and the consequences of those changes are still playing out in Cold Days.

I did want to comment on the evolution of female characters in the series. The Dresden Files series is told very tightly from Dresden’s point of view, so you don’t get any direct female perspectives. At the start of the series, I felt that the way women were described/characterised was the big flaw of the novels. To be fair Butcher has evolved some very strong and interesting female characters over the years, and the perspective of his protagonist has become a lot less patronising/patriarchal as he has grown. Having said that, Butcher has to have some of the most blatant “male gaze” physical descriptions of female characters I think I’ve ever seen, and that was particularly evident in this novel. I understand that given the point of view character is male and under the influence of some primeval forces in this story in particular, there is some justification. But considering Dresden spends most of the novel taking major beating after major beating, I’m surprised how often he stops to check out someone’s “physical assets”. I wouldn’t have the energy in his position, I’d be too busy saying ‘please stop hurting me’.

Look, high literature it ain’t but I’m always going to grab the latest Dresden Files novel almost as soon as it comes out. If you like your fantasy urban, your action fast paced, your violence uber and your wizards… well, wizardy then this series could be for you. If not, well, there are plenty of other fish in the sea!

(1) Yes Sean I know, even less genre cred points. I must be down below level 10 by now.