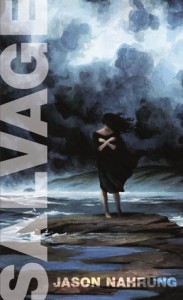 I didn’t really know what to expect from Salvage by Jason Nahrung published by Twelfth Planet Press. I’ve read and enjoyed Nahrung’s short fiction in a variety of venues, so I knew enough about his preferred genre to assume this novella would be horror. I’d also picked up somewhere that there were vampires involved and it was set on Queensland island (a juxtaposition that sounded interesting), but beyond that nothing. I even avoided reviews from my usual sources so was able to come to the story pretty fresh.

After some of the raw imagery and violence of Nahrung’s other work, I was surprised at how understated and nuanced a story Salvage is. The main character, Melanie, is in a slowly disintegrating marriage. Melanie and her husband Richard have come to a holiday house reminiscent of happier days to work on their marriage. Things aren’t going so well when Melanie meets the mysterious Helena.

The description of a marriage on the rocks was extremely effective, making Melanie’s eventual attraction to Helena very believable. Indeed for a shorter form of fiction, the description of all the main characters was excellent, with Melanie’s development over the course of the story particularly well handled. While I wasn’t able to personally relate to some of the issues Melanie was dealing with, the exploration of the character left me feeling very sympathetic to her plight.

(There is a bit of raunch in the story – if that kind of thing isn’t your cup of tea there will be parts of Salvage that you won’t love).

The setting was richly described, really immersing the reader in isolated tropical splendour. I had wondered how the bright sunshine reputation of Queensland would mesh with dark loving creatures of the night, but the combination of humid heaviness and wild tropical storms was a surprisingly effective backdrop.

The take on the vampire was also unexpected and quite different from what I’ve seen from Nahrung previously. Indeed, I came away from Salvage with a deeper appreciation for Nahrung’s body of work in general. His range is quite excellent and he is rapidly cementing his place as one of my favourite authors.

Nahrung is releasing a novel soon called Blood and Dust, from Australian publisher Xoum. I’ll be virtually lining up for my electronic copy.

(Disclaimer: I met Nahrung at a recent conference, and a nicer person you’re not ever likely to meet. I don’t think that fact has influenced my enjoyment of his work, but then again you never know).