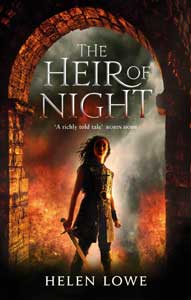 I first came across mention of The Heir of Night by Helen Lowe when it won the Gemmell Morningstar Award. I was a big fan of David Gemmell’s work in my youth and still enjoy them to this day, so the endorsement carries some weight. Add to this that Lowe is an antipodean author (New Zealand based) and I was very keen to read it.

The Heir of Night is the first of a trilogy. The premise is interesting – a blend of science fiction and fantasy. Hundreds of years previously a race of warriors (the Derai) arrived on the planet Haarth along with their intergalactic enemies the Swarm of Dark.

Fast forward to the present day and the Derai are dangerously weakened. A schism years before has separated the psychically powered priests from the warrior aristocracy. The main character, Malian, is the Heir of Night, one of the nine houses of the Derai. After an failed assassination attempt she discovers she has inherited powers, a discovery that means she is going to be exiled. The remainder of the novel tells the story of her journey to escape her enemies and start to explore her destiny, which involves being the saviour of the Derai and the whole world of Haarth.

This is not a stand alone story – the various strands of the story are not resolved and it has very much a “start of the journey” style to it. The trilogy continues with The Gathering of the Lost for those wanting to follow along, with the third book not yet released.

While not marketed as such, I got a very “young adult” vibe from this book. The protagonists are quite young (although presumably they will grow up over the course of the trilogy) and the story had a certain neatness to it that I usually associate with stories pitched at a younger audience. For example, people came into their powers very quickly and seemed to master them equally quickly, despite the fact that those powers had been neglected by the Derai society for 500 years. Powers and artefacts come along just in time to save the day. That kind of thing.

The world building was quite rich and the science fiction elements blended well with the fantasy. The magic/psychic powers system is well thought out and adds depth to the action sequences.

There was a refreshing gender parity that runs through the book, which is even more powerful because it is not explicitly commented on. Gender is simply not a factor in which roles a person can take in the society as it is portrayed.

I enjoyed the glimpses of the Haarth societies beyond the Derai, which (given the story arc) I assume will be more prevalent in the remainder of the trilogy. Some of the minor characters (such as the Heralds) I found the most intriguing, possibly because there was less backstory. There is always an issue with fantasy stories when introducing the world building elements – balancing orienting the reader with the danger of over-exposition. Generally The Heir of Night does a good job, with perhaps a few instances where the “excuse” to give background was a little forced.

Generally I enjoyed the novel, but didn’t gel with either of the main characters. It is perhaps a function of my age versus the age of the characters, but I didn’t identify with them which detracted slightly from my enjoyment of the story. However, there are a rich array of secondary characters which I did find interesting.

Recommended for younger readers or an excellent starting point for adults new to fantasy.