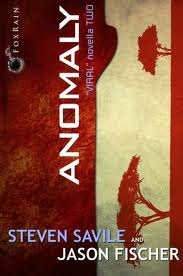 The Viral novella series is a collection of four novella length stories, all based around the theme of viral warfare. The four stories are only loosely connected together, each acting as an almost stand alone treatment of the topic. The series is anchored by author Steven Savile, who is co-author of all four stories. Along with Savile, the stories are co-authored by:

I read this series because I’ve liked the work of one of the authors (Jason Fischer – an Australian speculative fiction author).

Each of the stories in the series felt a little rushed, but I did think the four stories complemented each other well, making the series a good one to read together. The theme of immunisation programs used as a cover for more nefarious secret agent purposes, and the possible consequences, was pushed hard and a little repetitively in each story, although Anomaly used a sufficiently different take on the subject to be interesting.

The writing was consistent, especially considering the number of authors involved. I probably preferred Anomaly, but then I’ve liked Fischer’s writing for a while. Anyone who can find a way to use the line “If it’s good enough for David Hasslehoff, it’s good enough for me” in a story has my vote. The tension in the each of the stories was sustained and the action was credible.

A credible series of modern thrillers, each of which could have legitimately longer pieces in their own right.

Note: the series was provided to me at no cost by Jason Fischer, one of the authors.

One thought on “Viral Novella series – -30-, Anomaly, Martyrs and The Call – review”